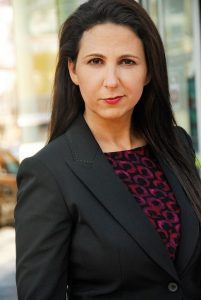 LOS ANGELES, CA ( August 13, 2018) – OKTV Network has appointed Charese Mongiello, as Head of Production. Her responsibility includes structuring the production department and helping to create a high- quality catalog of original content. Prior to joining the company, Charese produced on the sets of such notable films as Surreal Lounge, The Adventures of Lewis & Clark and The Run.
Charese began her career in entertainment, as an actress appearing in several films and stage productions. Her inquisitiveness to learn the production process led her to producing and directing a plethora of film projects. Her impressive credits include script supervising over 30 feature films, as well as many, commercials, web series, TV shows, industrials and short films. Additionally, she has produced and directed over 35 shorts, a web series and 2 feature films.
“We’re extremely pleased to welcome Charese Mongiello to our team,” OKTV Network founder and CEO Xavier “X” Mitchell said. “Charese brings with her a wealth of experience and passion as well as talent to our company,” adds Mitchell.
OKTV Network is on the rise to becoming one of most innovative companies in media.
Mongiello commented, “I am thrilled to join the OKTV Network family, a place where true art can occur and where everyone is treated like family no matter what differences they may have.”
For more information about OKTV, visit www.myok.tv
About OKTV
Opportunity Knocks Television (OKTV) is an internet streamed and broadcast entertainment network offering 24/7, 365 days a year programming. The network is committed to producing quality, compelling family-friendly entertainment options for viewers of all ages. Viewers are able to enjoy original programming, TV series, documentaries and feature films across a wide variety of genres. The free network can be watched from viewers as much as they want, anytime, anywhere, on any Internet-connected screen and in select cities via broadcast.
The network debuted in March, 2018 is currently on the air and available in over 60 countries on DIRECTV, Rabbit TV Plus, Roku, Amazon Firestick, Smart TVs, Sling TV, and its stand alone app available on all mobile platforms including google play and itunes. Based on its in-house metrics, OKTV estimates that it has around two million downstream and regular viewers.
OKTV also streams live on its Facebook page and via Phillips and Samsung SmartTVs.
Facebook:   @oktvlive
Instagram:   @oktvlive
Twitter:        @oktvlive