Jody Watley, the ‘first” to crossover R&B/Hip-Hop/Pop and Dance in Billboard Top 10 “Friends” was showered with affection in Atlanta for “Jody Watley Day.”

She was publicly celebrated for her time, effort, and dedication to humanity in the form of the prestigious Presidential Lifetime Achievement Award at the formal ceremony, held at the Georgia State Capitol, Thursday June 2, 2022. Click here to watch 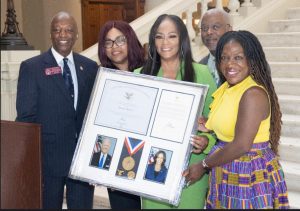 “To be honored and recognized in this way with your own day and the presidential lifetime achievement award is absolutely surreal, and I’m truly grateful to everyone who has supported me throughout my journey,” said the Grammy winning trendsetting icon in music, video, fashion and style.

The legendary singer, songwriter, producer, and businesswoman is one of the architects of 21st century pop who continues to be a solid and stellar fixture in entertainment. Her enchantingly smooth voice and memorable favorites can be heard all over the world.