This one is for the history books and generations to come! Chart-topping singer Jody Watley and Vice President Kamala Harris showed their support for the LGBTQ+ community at 2022 Capital Pride in Washington, D.C. 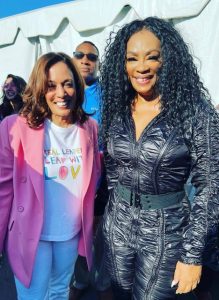 The two iconic superstars in their respective fields posed for the cameras at the event on Sunday, June 12.

Known for combining beauty and style as integral aspects of her career as a recording artist and dynamic live performer, Watley’s list of accomplishments and achievements are massive. The GRAMMY® winning artist in music, video, fashion and style and long-time LGBTQIA+ ally headlined at the official in-person music event and wowed the audience with her signature runway catwalk and energetic epic live performance.

In a statement released by Ms. Watley, she said, “It was such a special honor to headline this year’s Capital Pride concert.” “I truly had an amazing time.”

With over forty years in the music industry, the iconic singer, songwriter, producer, humanitarian and respected businesswoman, is one of the architects of 21st century pop who continues to be a solid and stellar fixture in entertainment. Her enchantingly smooth voice and memorable favorites can be heard all over the world.